I gave a talk in sacrament meeting today (the LDS Church worship service) and I had a few people ask if I could share it, so I thought there might be others who might enjoy reading it. I’ve shared it in full below:

Bishop Leloux spoke recently about how he would study the other team’s plays when he played football in order to understand their tactics and how to prepare for them.  It made me think about when I played football, then I remembered that I never played football. In fact, I am terrible at most sports, unless we can count foosball, then I’m actually not too bad.  When I would play baseball and basketball with the neighbor kids, it was like the Studio C episode where they have one person left, but nobody wants to pick them, so someone picks the guy mowing the lawn or a mailbox. But, like Bishop Leloux, I have been pondering similar questions for some time. Why is Satan attacking Joseph Smith? Why is Satan attacking the leaders of the Church? Why is Satan attacking the Book of Mormon? It seems to be getting worse.

One thing that I’ve learned from President Monson is to follow a prompting. These things have been on my mind and I feel impressed to share them.

When Joseph Smith was visited by Moroni, he was told that his name would known for good and evil among all nations, kindreds, and tongues.  How is that for some news from an angel? I’m sure that left him wondering for quite some time.

Nowadays, like in the early history of the Church, there are many attacks against the Church. It is something we’ve known since Joseph Smith first told of his vision. It’s part of our history as we have been driven from city to city, state to state, eventually across the plains, out of the United States to where we are now here in Utah to escape the persecution.  Now days rather than homes being burned down, we have have mostly attacks in all forms of traditional and social media. It has seemed to me that over the past 5-10 years it has really escalated.  I see attacks on the living prophet and apostles and their teachings, attacks on Joseph Smith, attacks on the history of the Church, and attacks on the Book of Mormon. As Elder Pritchard mentioned in the ward newsletter last week, there is even a broadway play that uses the name “The Book of Mormon” to ridicule our missionaries and religion. I’ve had non-members who have seen it say it was even offensive to them.

As I’ve pondered all of this, I’ve wondered what is going on? What is behind all this?

A talk that has really stuck with me is an April 2014 General Conference address by Elder Neil L. Andersen titled “Spiritual Whirlwinds.” He said in this talk, “The world will not glide calmly toward the second coming of the Savior.”

“Remember, … it is upon the rock of our Redeemer, who is Christ, the Son of God, that ye must build your foundation; that when the devil shall send forth his mighty winds, yea, his shafts in the whirlwind, yea, when all his hail and his mighty storm shall beat upon you, it shall have no power over you to drag you down to the gulf of misery and endless wo, because of the rock upon which ye are built, which is a sure foundation, a foundation whereon if men build they cannot fall.”

We’ve probably all heard the primary song, “The wise man built his house upon a rock.” How do we build our house upon the Rock instead of the unsteady shifting sand which is easily washed away with a big wave of water?

I don’t think it is a coincidence that President Monson’s last address implored us to read & study the Book of Mormon every day.

President Ezra Taft Benson said that the Book of Mormon is the keystone in at least three ways. I quote:

I really like what President Russell M. Nelson recently said about the Book of Mormon in his Oct. 2017 Gen. Conf. talk. I quote,

“The Book of Mormon both illuminates the teachings of the Master and exposes the tactics of the adversary. The Book of Mormon teaches true doctrine to dispel false religious traditions—such as the erroneous practice of performing infant baptisms. The Book of Mormon gives purpose to life.” The Book of Mormon shatters the false beliefs that happiness can be found in wickedness and that individual goodness is all that is required to return to the presence of God. It abolishes forever the false concepts that revelation ended with the Bible and that the heavens are sealed today.

Then he makes a promise to us:

I love old cars. I have an old Chevy Nova that I’ve been working on. If you’d seen it when I bought it, you might have thought it was ready for the junkyard. It wasn’t running and needed a transmission. I actually paid money for a car that I had to have towed away. When looking to restore an old car, you sometimes need to look past the present condition and see what it could become with some work. Rarely do you find them in pristine condition, but you know their potential. I think that is how God sees us. That’s how he saw Joseph Smith. He saw his potential.

Elder Andersen in the October 2014 (4 years ago) General Conference spoke about Joseph Smith. I quote:

“Joseph Smith is the prophet of the Restoration… He was the instrument in God’s hands in bringing forth sacred scripture, lost doctrine, and the restoration of the priesthood. The importance of Joseph’s work requires more than intellectual consideration; it requires that we, like Joseph, “ask of God.” Spiritual questions deserve spiritual answers from God.

I want to repeat that because it is a critical formula in finding out the truths of God. “Spiritual questions deserve spiritual answers from God.” We cannot use another formula. We can’t prove things through scientific or intellectual means.

Elder Andersen warns us that, “The negative commentary about the Prophet Joseph Smith will increase as we move toward the Second Coming of the Savior.”  We can’t let those who try to disparage Joseph Smith distract us. The Lord called him. He was not perfect. Our local leaders and current prophets and apostles are not perfect. But like the old Nova, God sees their potential.

Elder Andersen concludes this 2014 General Conference address in saying, “In our society beyond the veil of death, we will clearly understand the sacred calling and divine mission of the Prophet Joseph Smith. In that not-too-distant day, you and I and “millions [more] shall know ‘Brother Joseph’ again.”

We need a firm testimony of Joseph Smith. I have found my testimony of the Prophet Joseph Smith and of The Book of Mormon grow line upon line as I have read the Book of Mormon over and over again. I have also felt a need to repeatedly study Lehi’s dream. I have learned that those who held fast to the iron rod were able to make it to the tree of life. The iron rod is the word of God. It’s the word of the prophets. It is the Book of Mormon. I’ve found three things in my life to build a foundation on the rock, or in other words on Jesus Christ.

I have found that these three things will build us upon the Rock of our Redeemer, and these are the pathways for us to gain knowledge and a testimony that Jesus Christ is our Savior and Redeemer.  The wise man built his house upon the rock. This is the blueprint for building that foundation upon the rock.

Recently at a funeral for my aunt’s mother, the missionary who had tracted out their family and who taught my aunt Betty’s mother in Scotland in the 60’s shared an experience he had while working at the temple. He was watching a family who was being sealed. After the sealing, an 8 year old girl in the family burst into tears. He wanted to know the story behind it. This young girl had been in primary and had been taught a lesson on how families could be sealed forever together in the temple. That night when she knelt in prayer, she asked for God to send someone to help her family go to the temple. A voice came to her and said, “I did send someone. I sent you.“  She went and told her parents that they needed to sealed in the temple, and eventually they were able to be sealed.

The Lord has work for each of us to do. We were sent here at this time in the last days when there are great commotions and spiritual whirlwinds.  Maybe sometimes when we are praying for someone to help, it is actually us who was sent to help.

Remember we are not human beings having spiritual experiences, but we are spiritual beings having a human experience. This is all part of the Plan of Salvation.  We are in the last days. Satan is making his final attempt to lead the hearts of the very elect away. The time will come when every knee will bow, and every tongue confess and acknowledge Jesus Christ our Lord and Redeemer.  I join with President Monson in what he said at the conclusion of his final General Conference address, “I implore each of us to prayerfully study and ponder the Book of Mormon each day.”

I bear my most sincere and heartfelt testimony of the Book of Mormon. I know it teaches us about Jesus Christ and brings His Spirit into our life and our homes. Joseph Smith was called as the prophet of the restoration by God. President Monson who recently passed away, and the currently living prophets and apostles are called of God and teach us what we need to know as we live in perilous times. Jesus Christ is the Savior and Redeemer of all mankind, and our only way back to Heavenly Father.  I am thankful for my wife and children. Although I am not perfect, they support me as I try to follow the promptings of the Spirit and teach them the gospel.

In the name of Jesus Christ, Amen.

1 This know also, that in the last days perilous times shall come.

2 For men shall be lovers of their own selves, covetous, boasters, proud, blasphemers, disobedient to parents, unthankful, unholy,

3 Without natural affection, trucebreakers, false accusers, incontinent, fierce, despisers of those that are good,

5 Having a form of godliness, but denying the power thereof: from such turn away.

7 Ever learning, and never able to come to the knowledge of the truth. 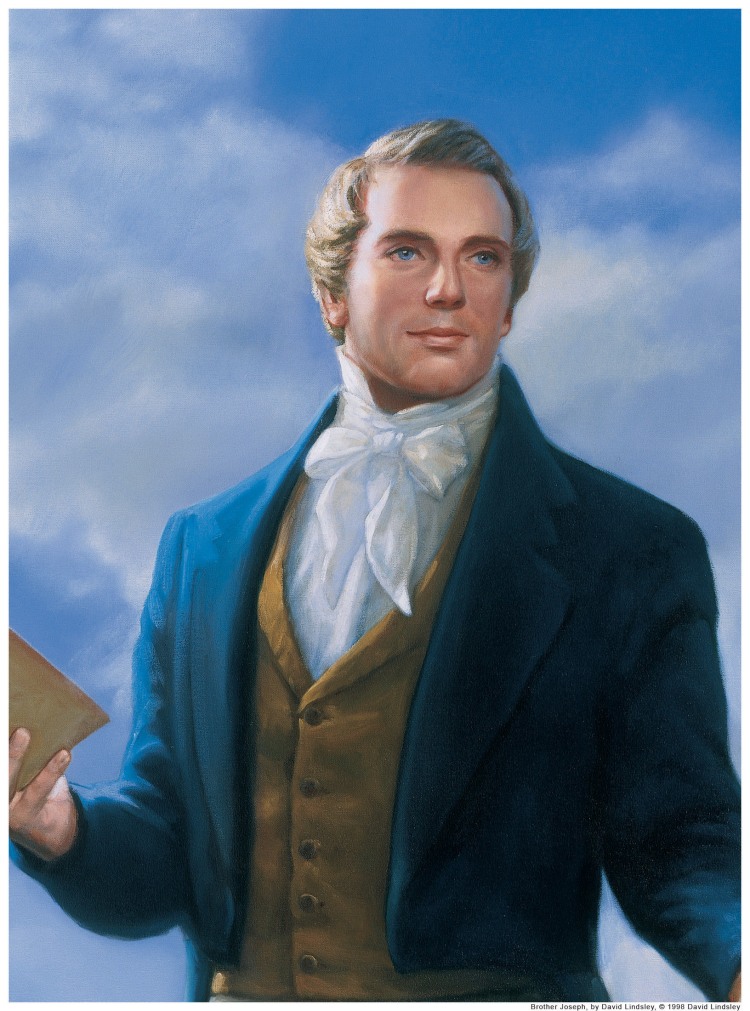